Doppler in the First Trimester

Being a sonographer who is registered and has scanned first trimester obstetrical exams for over twenty years, I have had it repeatedly ingrained in me to never perform Pulsed Doppler in utero, especially in the first trimester. However, diagnostic exams that aid in the screening and diagnosis of congenital abnormalities in the first trimester have become available and seem to outweigh the benefits versus the risks. According to AIUM’s official statement on the Use of Doppler Ultrasound During the 11-14 Week Scans (or earlier in pregnancy), the use of Spectral Doppler should only be employed when there is a clear benefit/risk advantage and both T1 and the examination duration are kept low. Protocols that typically involve values of T1 lower than 1.0 reflect minimal risk.

What does this look like in our Pregnancy Care Centers?

Typically, the baby’s heartbeat is first confirmed with M-mode. The heart is identified and a curser is placed on the movement and by virtue of the motion of the anatomy waveforms are created by which the heartbeat can be calculated. Depending on the calibration of the software utilized, the calipers need to be placed either from one part of a waveform to the same part on the immediately preceding waveform. Some machines will measure by calipers being placed on one waveform, skipping a waveform, and then placing a caliper on the next waveform at corresponding locations. 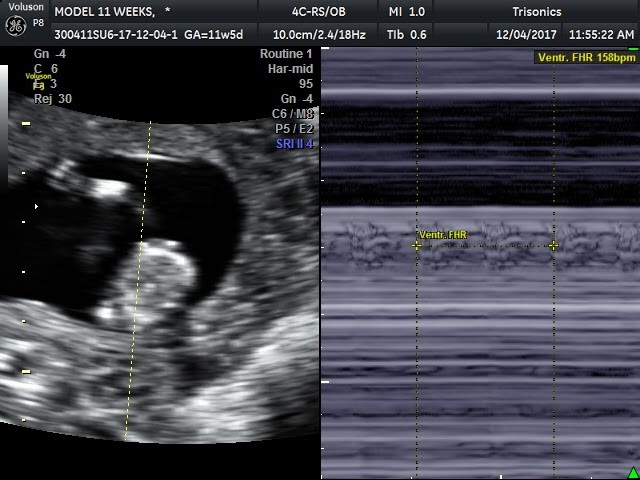 The client can see the flicker of the heart by observing the image and M-mode provides the mechanism for measuring the heartbeat. For the vast majority of clients, this is all that is needed to realize the reality of the creation growing inside. The image of the flickering heart makes it real and answers the question on the viability of the pregnancy.

However, for some, hearing the heartbeat seems to make it ever so real. I was talking with a new dad recently and he shared his ultrasound experience. For him, the pregnancy was very abstract. He wasn’t experiencing any of the bodily changes that accompany a pregnancy so the reality of a life growing inside his wife was difficult to really believe. He saw the images on the screen along with the flicker of the heart, but he said it was when the imager let him hear the heartbeat for just a few seconds that he realized the reality of life within. This was a married couple not in a crisis pregnancy and it still was the audible heartbeat that allowed him to thoroughly connect with his child. How powerful might it be for our pregnancies that are seemingly in crisis?

The possible benefit of the life being saved far outweighs the possible risks, especially when the guidelines are followed to ensure that possible bioeffects are held to a minimum. It is imperative that the imager be skilled and that the exposure of spectral Doppler be held to a minimum time utilizing the ALARA principle with the T1 of less than or equal to 0.7. As with all ultrasound exams, an informed consent form should be signed. As with all protocols and policies, your Medical Director will be the ultimate authority on the use of spectral Doppler.